What is Stitch the Magic?

We're still getting questions about what exactly Stitch the Magic is supposed to be.

It's basically a social meet-up of all those who are both yarnistas and Disney fanatics. Think Knit Night, but at the Happiest Place in the World. This is where we get together, talk about yarn, knitting, crocheting, weaving, whatever, and show off our love of Disney and Disney movies.

This year's theme is Moana. Two indie dyers (Beach Bunny Yarns & Dizzy Blonde Studios) have created custom colorways inspired by scenes from the movie. We also have two designers (knit & crochet) who will have patterns designed exclusively with these yarns. We have a custom project bag and themed stitch markers too.

While all of these fantastic items are available for pre-order sale, this isn't a vending event. If you want to get your hands on this exclusive merchandise, you'll have to order it HERE

We are meeting at the Polynesian Resort upstairs in the 'Ohana Restaurant Lounge and waiting area on SATURDAY, DECEMBER 3, 2022 at 1:00pm EST. In-Person attendance is FREE, but we ask that you register for your FREE ticket so we know how many goodie bags to prepare. So register HERE

For those that cannot physically be there, we also have a Virtual Event on Saturday, November 26, 2022, at 8:30pm EST. You'll also need to register for the FREE ticket, only so we know where to send the ZOOM info. Register HERE

If you have more questions, please contact us at info@beachbunnyyarns.com

And without further ado, we bring you the Stitch the Magic 2022 Collection in its entirety 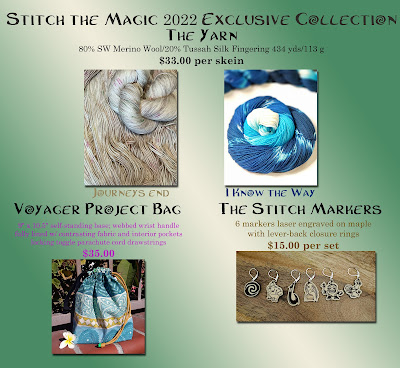 Prices are posted with each item.  Did you know that $3 of each skein purchase and $2 of each stitch marker set will be donated to The Marine Science Center of Ponce Inlet.  So, for every bundle purchased $8.00 will be donated.  The Marine Science Center suffered damage from hurricane Ian, so every dollar donated helps them rebuild so they can save even more sea turtles and other marine wildlife.

And don't forget, bundled purchases ship for free and receive the Heart of Te Fiti  reversible shawl fastener, an $18 value, free.  Bundles are extremely limited, as is the number of project bags.  Just select "Moana 2022 Bundle" from the dropdown menu

Just a quicky explanation of what we mean by bundle, and what sort of perks and extras you get when you purchase a bundle.

First, a bundle consists of one of each collection item:  One skein "The Journey Home" one skein "I Know the Way", one set of Moana-themed stitch markers, and one Voyagers' Project Bag.

And when you purchase this bundle, your order not only ships for free, but there is an amazing bundle upgrade:  A "Heart of Te Fiti" reversable shawl fastener! 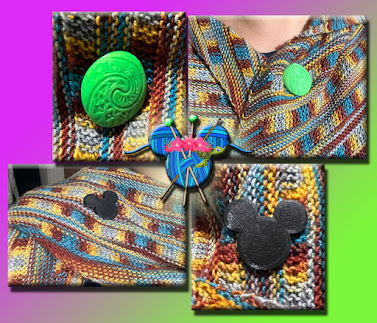 The shawl fastener is 3D printed and features the Heart of Te Fiti on one side, and a Mickey Mouse silhouette on the other.  The detail in the heart is amazing!  The shawl fastener is valued at $18, but is only available when purchasing the Stitch The Magic 2022 Collection Bundle, and then it's free, along with shipping!

Orders for this year's Stitch The Magic Moana collection will open a little later on today!

Last But Certainly Not Least... 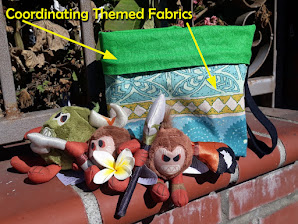 Our final item of our exclusive Stitch the Magic 2022 Collection inspired by the Disney full-length feature Moana is this exquisite project bag from Not Knots.  These project bags are all hand-made by Silvia Mendoza in California. 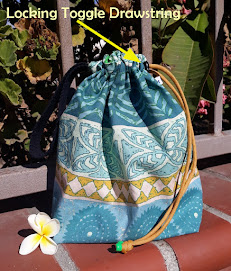 The exterior fabric is inspired by Polynesian tribal art, in lovely beachy colors.  The exterior also features a strong webbed wrist handle, a locking-toggle drawstring closure and parachute cord drawstrings which are decorated with beautiful coordinating pony beads  The lining fabric echos the Heart of Te Fiti, and the interior pockets, including Not Knots' signature "Needle Niche" feature Moana herself, as well as other characters of the story. 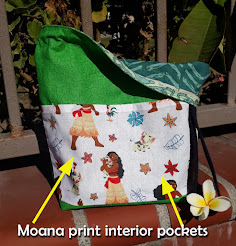 These bags are truly beautiful and measure 9 inches tall, 10.5 inches wide with  4 inch gusset, which makes for a generous, self-standing rectangular base.  The shorter (but wider) size makes it the ideal grab-and-go bag for a communKNITy on the go.  It is the perfect size for those one-skein projects that we like to work on while traveling, waiting at an appointment, or spending time at your favorite theme park with your favorite people! 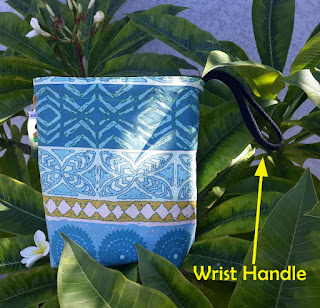 There is an extremely limited quantity, so get them wile supplies last.  Quantities will be limited to one per customer, or one per bundle*.  Pre-orders for the entire collection will be opening soon until a week after our Stitch the Magic event on December 3, 2022.  But, to be quite honest, I think they will sell out way before pre-orders close.  Orders will be filled on a first come-first served basis.  But when they're gone, they're gone!  In the unlikely occurrence that there are any bags left over after pre-orders close, you can purchase them directly from the website.  (Link to be activated on 12/10/2022)

*Bundles will be defined in the next blog post.

Dizzy Blonde Studios and Beach Bunny Yarns are honored to be partnering with several amazing makers in our industry.  Our next item in our exclusive event collection is this amazing stitch marker set designed exclusively for Stitch the Magic 2022 by Fangirl Fibers. 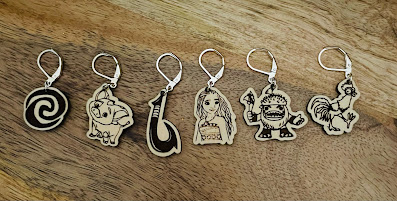 This set of 6 stitch markers depicts various characters and meaningful objects from the story of Moana.  Emily of Fangirl Fibers creates these beautiful stitch markers by laser engraving on maple plywood.  Due to their lever-back rings, these markers are very versatile.  They can be slipped onto your knitting needles like conventional markers, or by utilizing the lever back, they can be used as knitting row-markers or crochet markers.  The attention to detail is superb!
The set will be available for order, along with the yarn and project bags very shortly. Laura grew up in Southern California and her childhood was a busy one.  She started playing classical piano at age 5, and in high school she was a choir and drama geek.  When she was 10, her family moved to a house with a little bit of acreage, and she was introduced to 4-H, where she excelled in the home arts, mainly baking, canning and home decor.  She tried her hand at the fiber arts, and had limited success with crochet, and no success at all with knitting.

After graduating high school, she enlisted in the Air Force, and spent 2 years stationed in England, with the remainder of her tour spent stateside.  After 8 years, she moved back home to CA and attended college.

She didn't start knitting until 2004, when her best friend informed her that she was going to learn.  Her friend worked in the film industry and was getting tired of losing all of her knitting friends when the show wrapped.  She told Laura that if she learned to knit, she'd always have someone to knit with.  They even wrote a knitting blog together:  JenLa and kept it going for almost 4 years.  She also co-hosted the KnottyGirls podcast with another friend for 2 years. 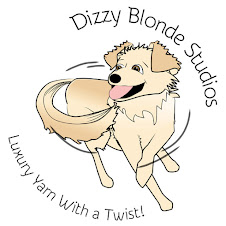 In 2008, Dizzy Blonde Studios was born.  Now, most people think that Laura's the Dizzy Blonde.  While indeed blonde, and at some times, very dizzy, the Original Dizzy Blonde was Trixie, her much beloved rescue dog.  Since then, she has rescued many a Dizzy Blonde, each with their own colorway.

In 2013, Laura hosted her first ever "Knit Dizzney" event at the Disneyland Resort in Anaheim, CA.  Each year, a Disney theme is chosen and colorways are developed inspired by the chosen theme.  2023 will mark the 10th anniversary of Knit Dizzney.

And, now living on Florida's Treasure Coast since 2018, Laura will be co-hosting the inaugural year of Stitch The Magic...a similar-yet-different event at the Walt Disney World Resort in Orlando, FL.  Hope to see you all there! 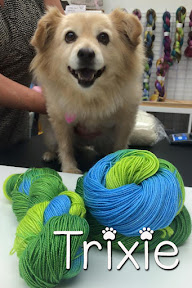 I Know the Way 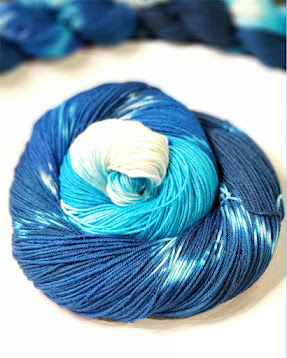 For me, one of the most visually stunning scenes in the entire movie is when Grandma Tala's spirit swims under Moana's canoe and then appears to Moana in human form, and later the voyaging ancestors make an appearance to Moana as well in "I Am Moana (Song of the Ancestors)".  I love how vast the ocean feels, and that you can't determine where the ocean meets the night sky, except for the placement of the stars.

This pivotal moment of Moana's journey is the one that inspired "I Know The Way".  Deep azure and sea breeze blue with a touch of white reflects the image of Grandma Tala's manta ray spirit swimming though the night ocean to advise and encourage her granddaughter. 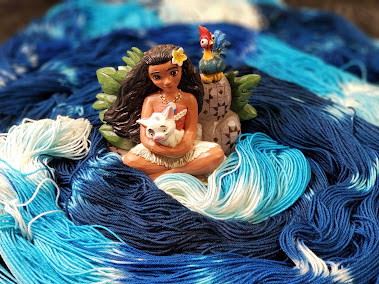 "I Know the Way" comes from Dizzy Blonde Studios.  The yarn is 434yds/115g of an amazingly soft 80% wool/20% silk blend and a joy in your hand whether you knit, crochet or do any other fiber art involving yarn.  It has a soft sheen with just the right amount of drape.  "I Know the Way" will pair perfectly with "The Journey Home" for your favorite two-color projects.

Oh, and did I mention?  Part of the proceeds from the sale of both colorways will be donated to The Marine Science Center.  So, fabulous yarn AND contributing to an amazing cause?  I'd say this is a win for everyone!  Stay tuned for pricing and pre-order information, coming soon. 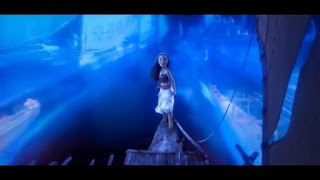 What is Stitch the Magic?

We're still getting questions about w hat exactly Stitch the Magic is supposed to be.  It's basically a social meet-up of all those ...